Chris began his project in Buffalo, New York  having recorded a majority of his debut record at the Goo Goo Dolls Studio. Having spent time making his debut record in both New York , Los Angeles and multiple studios, Chris recorded a records worth of songs and decided to release his album as a self titled debut called "New Stellar Star".

Chris' music can be described as modern day Alt-Pop-Rock with driving sing along Chorus'. New Stellar Star has played a variety of shows ranging from intimate acoustic performances to much larger venues. NSS performed at a fundraising event for Haiyan Relief  in 2013, as well as a fundraising concert at the University of Manitoba for Haiti Relief  in 2010.

Chris is also involved in the art and design world as a self taught modern contemporary abstract Art Painter. His work can be found in private residences, high end furniture and design stores and business'. Chris was commissioned to paint custom artwork for luxury home builder, Maric Homes for their million dollar HSC Lottery Home that was part of the Fall 2013, Parade of Homes.

Chris' music was part of the soundtrack to the film H&G having its world premier at the Vancouver International Film Festival  in fall 2013 as well as screenings in Los Angeles and releases in select theatres across Canada and  the US in 2014.

Chris' music has also been used on CTV television show Trucker Television. In 2014 , New Stellar Star made the semi-finals for Manitoba Songfest wherein out of 166 Manitoba Bands, New Stellar Star advanced to the finals  placing Top 6 of the best songs in Manitoba for Songfest 2014 . Chris appeared and performed in a Songfest documentary on MTS Television.

New Stellar Star released a brand new record called "Californiak" with 12 new songs. The first single is called "Undone" and was mixed by Warren Huart/ The Fray/Aerosmith. The balance of the album mixed by Dale Penner/ Nickelback.

Stay tuned for updates on New Stellar Star and on Chris and his acting and painting career. Singles are available now on iTunes and Amazon and CDBaby! 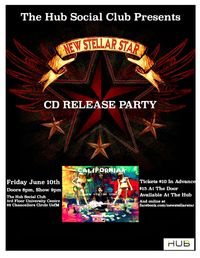 Chris Bullock celebrates the release of his second album "Californiak" June 24th at the HUB PUB at the University of Manitoba. 3rd Floor U-Center. Pre-Sale tickets are $10 and $15 at the door. 18 and over.